Able Eyes uses state of the art virtual tours and video to help people learn about new places and skills. Their high-tech approach for experiencing the world enables people with disabilities and other special needs to explore unfamiliar territory from the safety of their own home.

In this charity spotlight, I spoke with the Executive Director of Able Eyes, Meegan Winters.

Eight years ago, Meegan taught children with autism spectrum disorder through the Jackson County Intermediate School District. While attending an education conference in Chicago, she met the met the CEO of a company creating virtual tours for medical facilities as a marketing tool.

This chance meeting gave Meegan an idea. Not only could virtual tours be used to help market local businesses, they could also help people on the autism spectrum experience new and unknown places before venturing there in person! The timing of this idea didn’t quite work out, but the idea stuck with her.

Years later, in early 2017, Meegan was working as an Assistant Principal at Jackson County ISD when a new opportunity arose. She met Brian Town, the CEO of Michigan Creative, and discovered his business was using similar technology to help local businesses. This time, Meegan went all-in. She quit her job to focus on helping people with autism learn new skills and explore new places using state of the art technology.

Able Eyes launched at the end of August 2017, serving not only those with autism but anyone of any ability. 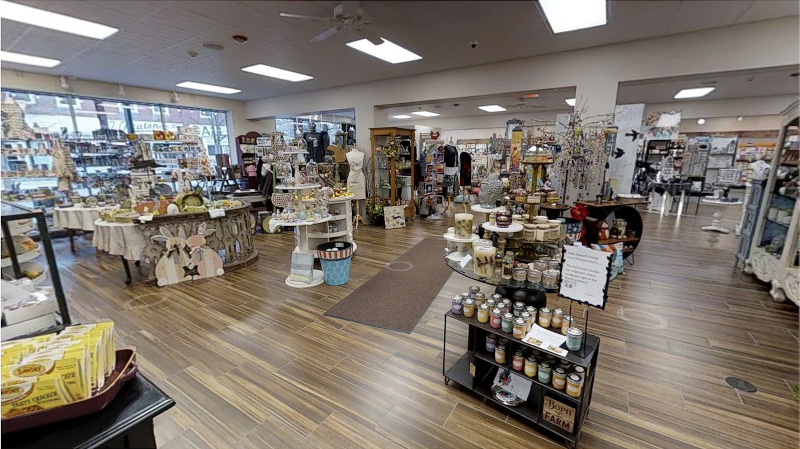 Able Eyes’ premiere service is 360° Video Tours. These interactive tours allow the public to explore a business or public place online. They are useful for familiarizing oneself with a layout and amenities of a location, preparing for a first-time visit to a new place, and considering accessibility options.

Virtual tours are helpful to more than those with special needs as well. For example, parents can see how kid-friendly a location is before bringing their child. 360° tours can also appear on Google Maps’s and are an effective marketing tool for businesses. And while this is typically a paid service, donors may sponsor tours at specific locations if they wish.

Able Eyes also creates How-to Video Models. These instructional videos show first-person perspectives of tasks being performed. They are a visual way for individuals to learn skills such as tying shoes, washing dishes, and vacuuming at their own pace in the safety of their home.

Anyone who wants to join the Able Eyes community is encouraged to submit their own videos. Once reviewed, Able Eyes will host the video on their website. This way, we can all open up new pathways for each other.

Building a community that empowers people with disabilities is one of several goals Meegan has for Able Eyes. She also wants to improve the exposure of Able Eyes and the virtual tours they create for businesses and other public venues across Lansing.

Receiving donations for their first sponsored tour was also a very uplifting experience for Meegan. She would love to see more sponsorships and partnerships with Able Eyes.

Not six months after launch, Able Eyes has created virtual tours for more than two dozen businesses around Lansing and even more how-to videos. Each tour is built from real connections with real people. These connections are a great accomplishment for Able Eyes because they are the foundation of a community in the making.

Those same connections are also an accomplishment for Meegan because she finds herself somewhat reserved around new people. Her mission — Able Eyes’ mission — takes her out of her comfort zone to pursue something bigger than herself.

Meegan has learned to trust her inner voice and she encourages those pursuing their own cause to do the same. If you’re contemplating trying something new, Meegan recommends asking yourself “What’s the worst that could happen?” The answer may not be as bad as you think. Just keep your eye on the prize and have faith that you’re on the right track.

It’s also helpful to build an inclusive community around your mission. There will be people who share your ideals and want to help, give them a way. Meegan also encourages feedback. It’s a great way to improve a nonprofit’s services!

If you want to learn more about Able Eyes, you can reach them by clicking one of the buttons below.