Williamston Theatre supports Michigan culture and professional artists by producing entertaining and often sentimental performances that resonate with their audience. By connecting with their audience on an emotional level, the theatre helps build new relationships and rekindle old ones.

In this charity spotlight, I spoke with the Development Director of Williamston Theatre, Emily Sutton-Smith.

The Williamston Theatre got its start after John Lepard, the theatre’s Executive Director, moved back to Williamston from L.A. to raise his daughter and be close to family. While working at The Purple Rose with Emily, Tony Caselli, and Chris Purchis, he learned that the Boarshead Theatre had passed up an opportunity to move to Williamston.

John thought Williamston would be perfect for a small theatre company. It’s walkable, it has a scenic downtown, and there are great restaurants and shops for visitors. The idea of opening a nonprofit theatre in Williamston stuck with John and he asked Tony, Chris, and Emily for help.

Much of 2005 was spent formalizing their business plan and procuring space for the theatre in downtown Williamston. A huge volunteer effort was organized to remodel the building. Williamston Theatre opened its doors to the public with their production of Additional Particulars, a comedy by Ed Simpson, in the summer of 2006. 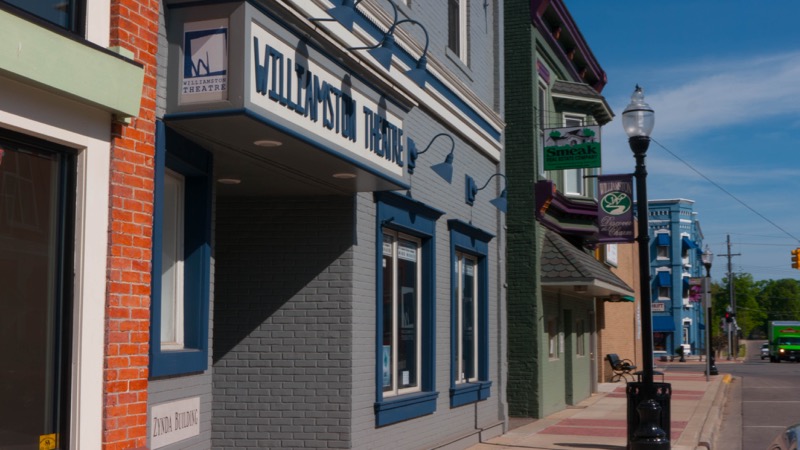 Williamston Theatre is a theatre-in-the-round. It has seats on all four sides of the stage but is commonly used as a 3/4 thrust space, where the audience only sits on three sides. This classic configuration results in a lot of creative use of the space.

The theatre runs year-round putting on six productions per season, holding staged readings, and hosting other special events. Their tenth season is currently underway and the eleventh season starts in the fall. Williamston Theatre also has a YouTube channel where viewers can watch the Monologue Project and other online works.

The productions are designed to connect with their audience by helping them feel like they are a part of the show. Emily knows they’ve made that connection when someone is inspired to call a loved one after a performance.

Compassionate experiences are not just part of Williamston Theatre’s art, they are also something reflected by the theatre’s supporters. When one of the theatre’s directors was hospitalized, the community raised enough money to cover most of the medical expenses! Those personal connections are some of the theatre’s greatest rewards.

In 2014, the Williamston Theatre was honored with a National Theatre Company Award. The American Theatre Wing —creator of the Tony Awards— presents this award to the twelve most promising theatre companies across the country. This further demonstrates how committed Williamston Theatre is to its mission and supporters.

By the end of the summer, Williamston Theatre would like to complete an anthology of fourteen plays with world premieres at their theatre. This will help other theatres discover new plays they may want to produce. It’s also a great way to promote Michigan talent.

Emily would love to produce shows in larger markets and grow their relationships with the Theatre Communications Group and National New Play Network. These national organizations are great for supporting Michigan professionals and partnering with theatres all across the country.

If you want to start a nonprofit, build an awesome team first. Having a well-balanced group of people who work well together as the foundation of your organization will be vital to its success. It’s also important to make sure you provide a work environment that encourages collaboration and creativity.

Emily says “Come on down!” Volunteering for an organization that hosts performances (such as Williamston Theatre) will typically get you into a show for free. If you’re not sure how to help, try ushering. Stop by the theatre or call if you’re interested.

If you want to learn more about Williamston Theatre, you can reach them by clicking one of the buttons below.